Barry Carpenter – Nurturing a Culture of Inquiry in your School

On Evidence for Learning…

“The Evidence for Learning app, for me, is the final piece in the complex jigsaw of meeting the needs of children with special or additional educational needs – especially those with complex learning needs. It does not presume a particular developmental pathway but rather offers to the creative teacher a tool of inquiry.

It enables the teacher to investigate, discover, and find out, for and with the child, their pathway to successful learning. As such it is a powerful change agent; a catalyst for stimulating a process of meaningful enquiry.

It liberates teachers from the constraints of traditional curriculum models and facilitates a curriculum that is responsive the complex profile of learning presented by so many 21st century children.It celebrates, through its personalised approach to assessment, the attainment and achievement of all children.

In particular, it enables us, as teachers, to address the mental health needs of our children, and to develop a well-being approach that truly meets their deepest emotional needs.

I have searched for many years for a means of dignifying the learning of our children with complex needs . With Evidence for Learning I have found that means; an app with the potential for ongoing School improvement which supports and sustains effective progress in children, and with endless possibilities.” 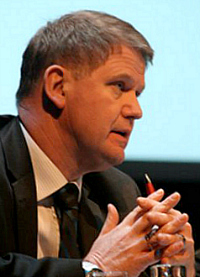 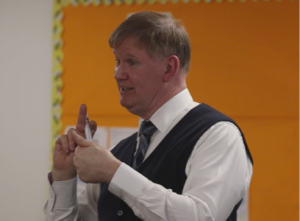 Barry joined the team at Evidence for Learning as Principal Adviser in June 2018.

In addition to bringing to the company his invaluable and unique mix of 40 years expertise and experience in the field of SEND and Complex Needs, which includes roles as Teacher, Headteacher, Principal, Academic Director, Inspector of Schools, Director of the Centre for Special Education at Westminster College (Oxford), Government Adviser and most recently Professor of Mental Health in Education at Oxford Brookes University; Barry is also a key participant, facilitator and presenter within the EfL SEND Community. (Click here for more details)

(Barry’s full bio is below)

Nurturing a Culture of Inquiry in your School

The lecture/workshop delivered by Barry Carpenter available to watch below, formed part of a series of regional EfL SEND Networking & Development Days that were held across the UK during the end of 2019 and early 2020. These events are networking and development days for leaders,  practitioners and governors at schools, colleges and alternative provisions that are part of the EfL SEND Community and support learners with SEND or any form of additional learning needs.

These events are hosted by Evidence for Learning throughout the year. Please get in touch if you’d like more info about the EfL SEND Community or any of the SEND events.  This filmed event took place at Green Lanes School in Cheshire, UK in Feb 2020.

Lecture/Workshop Overview
Teaching is an evidence based profession, but in the field of Special Educational Needs it is often only through a process of inquiry that we generate evidence about children’s attainments and achievements.

Faced with a generation of children with Complex Needs , who are transforming curriculum and pedagogy in our Schools, it is only through a process of Inquiry focused practice that Teachers will discover meaningful , personalised pathways to learning. Research is reporting ever growing numbers of children surviving premature birth, or being born with Foetal Alcohol Spectrum Disorders. At the same time profiles of Autism and ADHD in children are also being revisited in the light of new scientific evidence.

All of this impacts on how teachers teach, and how they develop effective interventions for children with complex special needs. We have to evolve a pedagogy which embraces these children as effective learners. Following extensive research in schools, Professor Carpenter has developed approaches build around ‘engagement in learning’ though Inquiry (Carpenter, Egerton et al 2015) , which enable teachers to refine their observations in line with the often ‘ spikey ‘ profile of learning the child presents.

These approaches are explored through interactive dialogue with course participants, who consider how to blend inquiry into everyday practice, and how this will build a
‘finding out culture’ for practice their school setting .

Barry Carpenter was recently appointed to the UK’s first Professorship in Mental Health in Education, at Oxford Brookes University. He is Honorary Professor at universities in the Ireland, Germany and Australia. He has been a Fellow of the University of Oxford.

He has been awarded an OBE and CBE by the Queen for services to children with Special Needs. In 2017 he was entered into “Who’s Who” in acknowledgement of his national and international contribution to the field of Special Education.

In a career spanning more than 40 years, Barry has held the leadership positions of Headteacher, Principal, Academic Director, Chief Executive, Inspector of Schools and Director of the Centre for Special Education at Westminster College, Oxford. In 2009, he was appointed by the Secretary of State for Education as Director of the Children with Complex Learning Difficulties and Disabilities Research Project. In that role Barry led an important and valuable piece of research on the use of Engagement as a pedagogy. This work become the foundation for England’s Department for Education’s new guidance for assessment (DfE, 2019). Since completing that research, Barry has overseen the development of a national project developing online ‘Training materials for teachers of children with severe, profound and complex learning disabilities” (www.complexneeds.org.uk).

He is the author of over 150 articles and many texts on a range of learning disability/special needs topics. In the last 12 months, his work has been translated into German, French, Dutch and Russian. His most recent book publications (with Carolyn Blackburn and Jo Egerton) focus upon Fetal Alcohol Spectrum Disorders (FASD). Most recently he co-authored “Engaging Learners with Complex Needs” (Routledge).

Barry lectures nationally and internationally. In recent years this has included China, Japan, Abu Dhabi, USA, and Germany. In 2018 he will be giving lectures in Australia and New Zealand. He is the co-founder of the National Forum for Neuroscience in Special Education. For the Mental Health Foundation, he Chaired the National Inquiry into the Mental Health of Young People with Learning Disabilities. He is currently Chairing a working group looking at the needs of Girls on the Autism Spectrum, which is the focus of his latest book.

Barry has 3 children – one a School Principal, one a Senior Occupational Therapist and a daughter with Down’s Syndrome, who now has a home of her own, published her first book in 2017, and is on an Apprenticeship as a Teaching Assistant.